After David got famous with the TV-Show KNIGHT RIDER and his career got bigger and bigger he could start thinking of realizing his singing plans as a 2nd career. The conditions for it were great: David was a world superstar and he even had the money he needed to produce his first album. He prepared his first album very carefully and engaged Jane McCormack who was an experienced manager in that business. 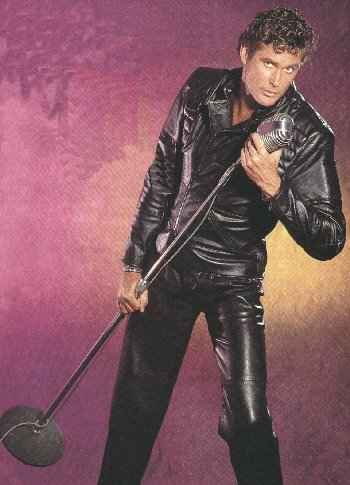 1984 he announced that he'd love to produce an LP. Only this simple suggestion was enough: Just a few days later David's phone rang and the Austrian LP-Producer Marcus Barone made him an offer how to realize his plans for a music career. The funny thing was, that it was Barones daughter who told her father about David and his ambitions to get a singer, because she was a huge KNIGHT RIDER-Fan.

For David's Debut Barone engaged Joel Diamond and organized a contract with the label "Silver Blue", which belongs to CBS.

A few weeks later David got the opportunity to go to the famous Hit-Factory Studios in New York. Some other songs for his debut got recorded in the New York Park South Studios and in the Oasha Studios in Los Angeles.

The album got an effective title: (K)NIGHT ROCKER. The songs and David's outfit fit to his image as Michael Knight. Like this it would be easier to sell his first album, because most of the fans knew KNIGHT RIDER.

To get the "AHA"-Effect David bought the right to use his partner KITT for concerts AND other public occasions. "The kids just loved this car, so I had to get it with me on the tour", David added. For the premier of his debut album (K)NIGHT ROCKER in Austria David came in his car KITT.

The youth-magazine BRAVO reported about it: "With bombastic sound and heavy fog suddenly the door of a pyramidal tent, made of white satin, got open. Slowly KITT rolls on stage and David is standing on KITT's roof in black leather clothes and a red guitar. He starts to sing the first song of his first LP (K)NIGHT ROCKER. Then he slowly slides down on the ground and asks: "Would you please say hi to my friend?" The whole hall was raging.

The red light in front of KITT started to blink. A sign that he wanted to tell something.but it was only a yawing. But suddenly as the crowed was screaming WE LOVE YOU KITT, he answered I LOVE YOU TOO." The he started to reporting about their trip to Austria in German. He even was teasing David when he asked: "Hey David, why don't you speak German?"

The reason that David started his singing career in Austria was simple: David also celebrated his first success with the TV-Show KNIGHT RIDER outside of the USA in Austria, so he just had to start here his singing career too. The Austrian fans were enthusiastic about his music! Soon David could go back to Austria and take his first Platinum-Award back to Los Angeles.

As David wanted to publish his new Album in Germany, there was a quarrel with his German party to an agreement and so David removed his Album suddenly of the music market in Germany. But as KNIGHT RIDER became also very famous in Germany (about 3 years later) his German producers started the publishing of the (K)NIGHT ROCKER-LP again.

Together with Catherine Hickland (Ex-Wife), he sang 3 songs on that LP, because of the KNIGHT RIDER epsiodes they did together. They even sang together during a KNIGHT RIDER episode.

After the TV-Show KNIGHT RIDER ran out in 1986 David throw himself into the preparations for his next album. At the same time David also decided that his acting career needed a living-cell therapy and so he decided to go more in the direction of movies than TV-Shows. 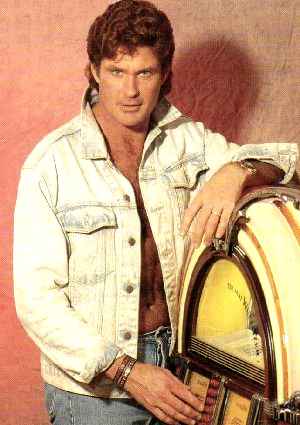 "Actually I don't want to have a new TV-Show-Role", David said. "I don't want to be always Michael Knight!" Instead he signed a contract for a movie called "Final Alliance". It came to the cinemas in 1989 but was not as successful as it could have been.

In Austria, the headquarter of David's Record Company, "Lovin' Feelings" got again a Platinum-Award because of good promotions. But for further awards the signs were bad.

Outside of Austria David had no success with his KNIGHT RIDER-Image album. In Germany where David got now a big Star because of KNIGHT RIDER there was not even a record company who wanted to offer him a contract.

David had to admit that "Lovin' Feelings" at best was a prove for his musical talent but otherwise it was only a mix between Engelbert and Julio Iglesias. David's music career seemed to be over.

Besides KNIGHT RIDER, which was be shown all over the world now, whether his acting career nor his music career seemed to continue.

Besides his private live got more and more out of control. His marriage with Catherine Hickland ended in 1988 because the press reported every step David or his wife did. As KNIGHT RIDER ended in 1986 and Catherine's TV-Show CAPITOL ended, both got under pressure. A martial row was now unavoidable.

The gossip columns reported everything about their lives and so the pressure on them got higher and higher. Catherine could not understand why it was so hard to get her career running again.

But nevertheless David assures: "I still love Catherine. I admire her independent and free being."